Back from the summer break, I read an interesting article on combining OCL expressions with CTL formulas. Apart from the modeling approach itself, it was interesting to me that the authors used Henshin to generate their state spaces and also compared their modeling and the performance of Henshin's state space generator with GROOVE.

While the GROOVE tool does not really provide an API for its simulator and state space generator, it is fairly easy to do this programmatically in Henshin:
That's it. After you have generated the state space, you can either save it or use a validator to check invariants or to do model checking etc. 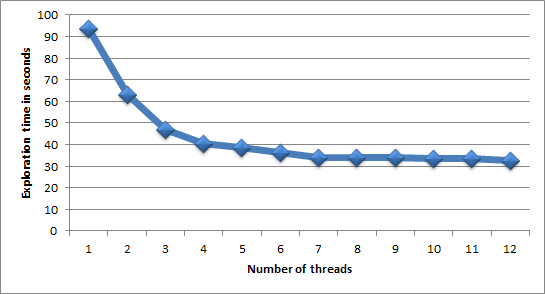 The chart shows the time needed to generate the state space of the dining philosophers example for 10 philosophers. What you can see is that by using multi-threaded state space generation, we obtain a speed-up of factor 3. In absolute numbers, the generator explores around 2000 states per second. That is just half a millisecond to find all rule matches for a state graph, make a copy and transform it for every match, and look up states and update the state space. If you compare it with the performance of the Henshin interpreter itself (see e.g. here), these numbers are top notch. Note also that the speed can be greatly improved simply by increasing the cache sizes of the state space generator (which requires more main memory though).

That being said, there is still of course room for improvement. For example, the scale-up for a high number of processors and threads is not as good as we have hoped. The required locking of the state space seems to be the main bottleneck. The performance can be probably tweaked but it will of course never be as fast as model checkers that work on vector-based data (as opposed to graphs).

Henshin 0.9.10 on its way. We are working on the new version of Henshin which we hope to release in November 2013. It will target and require Eclipse Kepler. The most exciting new feature will be a new execution platform for Henshin transformations. More on this later.

Posted by Christian Krause at 9:13 PM